In 2015 the company WestLotto and the popular gamble 6aus49 (similar to Powerball or Mega Millions in the USA) had its 60th anniversary in Germany. This year a bronzed bust of Lothar Lammers was unveiled in the lobby of the head office of WestLotto.
Lothar Lammers was the inventor of the German system of 6aus49 which was exported to many other countries later and he was the former executive of the company too. The bust was manufactured by EGO3D and was unveiled by the current executives of WestLotto Theo Goßner and Andreas Kötter.
The company got congratulations from many celebrities. WestLotto is a big sponsor of many beneficial projects such as (state-funded) sport promotion, monument conversation, welfare services and nature protection.

First, we sculpted the bust digitally with just a few photos of Lothar Lammers who passed away 2012. Then, the digital model was printed on one of our 3D-printers. Finally the bust was bronzed.
This bust is one of a whole clutch of portrait sculptures we did for special occasions and from well-known persons. 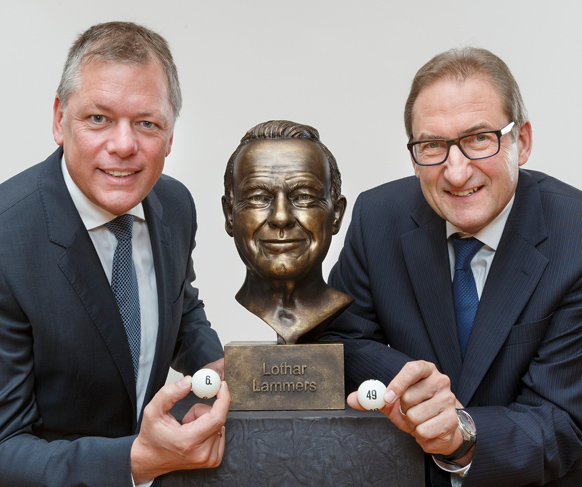